An Interview with Weird Giraffe Games

Today we have a special interview with Weird Giraffe Games. Thank you, Carla, for taking the time to visit with us. You have a new game coming out, Tumble Town, about the old west. As a bonus for our readers, we have put together a board game based unit study about the wild west that is available for free on our unit study page. More information about the unit study will be at the end of the interview.

What did you love about the initial Tumble Town pitch enough to sign the game?

It wasn't a formal pitch for Tumble Town, but playing prototypes with friends. I was just getting to know the designer Kevin and so far we had gotten along great. I loved the dice stacking to create the buildings and the Western theme, as I'm all about themes that aren't out there as much. Those two facts, coupled with thinking that Kevin was a person I could work well with, made me offer to sign and publish the game. I hope everyone else falls in love with Tumble Town as fast as I did!

What is the game about?

In Tumble Town players are rolling dice, constructing buildings, and competing to make the best town in the West. To do this, players are drafting building plans and dice and trying to construct buildings based on the plans. Each plan requires a certain type and value for the dice and if you can construct it, you'll either get a power you can use every turn, an instant power, or a new scoring condition for you at the end of the game. After two dice supplies run out, the game is over and players finish the round, then tally their scores.

What game mechanics are featured in the game and why?

There's set collection, hidden objectives, dice manipulation, engine building, and a spatial puzzle. For the set collection, it was added to give players an easy direction to go in the game; simply go for the style icon that gives them extra points. I always like games that have some hidden aspect of scoring, which is why the hidden objectives are in the game. It's always sad to know that you're losing, so I'd prefer if players only know that for sure at the end of the game and at that point, it's over and they can play again, if they want. Dice manipulation was added to give players more agency, as players are rolling dice and sometimes dice rolls are not in the favor of the player. If player's get enough dice manipulation powers, they'll be able to construct any building that they wish. Engine building is in the game to give players some different strategies to go down. They can focus on manipulating dice, getting more dice, gaining more scoring objectives, or any combination of the three. The spatial puzzle aspect of the game was added in last and it was added in to give additional things for the players to think about and to appeal to players interested in spatial aspects of games.

What challenges did you encounter in developing and preparing to Kickstart Tumble Town?

Figuring out the end game of Tumble Town took more than a year and a half to decide on. Kevin Russ, the designer, originally had the game end after a specific number of rounds. I prefer games endings where you don't know the exact number of turns that you're going to get as then you can't completely math out the game. At one point, the game had dice mines where players could take dice with specific values and once two dice mines ran out, the game end would be triggered. I ended up getting rid of the dice mines as players got confused about what dice to roll and what dice not to roll and I don't like confusing players. The next game end was triggered when players would run through the two of the three building plan decks. This worked for most players, but some beginner players would run out the level 1 deck, then go to the level 2 decks, and cause the game to end before getting to the level 3 deck. Switching to when the dice supplies ran out kept the player agency where a player that knew what they were doing could end the game early, but new players would not.

Who, in actual wild west history, most fascinates you and why?

I wouldn't say there's any particular person in Wild West History that fascinates me, but I am kind of in love with the ring tailed cat that lives out in the West. I didn't know about it until I was researching more about the West, but as soon as I saw it, I was so fascinated. It's a member of the raccoon family, but looks kind of like a cat crossed with a lemur. I definitely want to include it in Tumble Town somewhere, but it's looking like it'll be in the animal expansion. 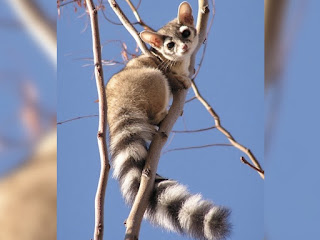 You are launching Tumble Town on Kickstarter soon. Why do you choose to use Kickstarter? Are there pros and cons to this method? It's not so much of choosing Kickstarter as I wouldn't be able to make games without Kickstarter. It requires a lot of money to manufacture a game and doing so without knowing if the market is there for the game would destroy most small companies. Kickstarter lets me see if people are interested in the game enough for me to do a full print run. As far as cons, running a Kickstarter is super stressful and I hope to get to the point where I can go straight to retail with a few games but I feel like that will be far from now, as the pros of Kickstarter far outweigh the cons.

Where can people go to make sure they get a copy of Tumble Town?

Where can our readers find Weird Giraffe Games online?

If you want to learn more about the wild west you can check out our wild west unit study on our unit study page. All of our units studies feature a board game and Tumble Town works well for this unit as an alternate game.

The study covers language arts, history, science, and art. Along with playing games, you will be reading some great books, drawing maps, and even constructing a replica old west town in Minecraft or diorama form. I hope you have a blast learning along with us!

Our unit studies are free thanks to the generosity of our patron. If you would like to support the making of our content, become a patron here for as little as $3 per month.

10 Games to Take on Vacation